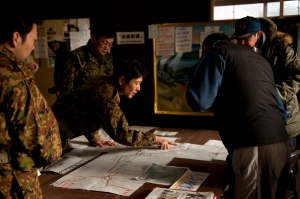 10 000 people have died in Ishinomaki alone. The survivors are trying to rebuild their city.

Cautiously positive messages are now coming from Fukushima: electricity has been wired to the control room – to one of the reactors.

But in the sea outside the nuclear plant, radiation is already 80 times higher than normal. The Swedish National Food Administration therefore decided yesterday on border control for Japanese fish.

The inhabitants in what used to be cities along Honshus North-eastern coast do not have access to water or food – but they patiently cue up for the little that still is available.

Aftonbladet’s Elin Lindqvist has travelled through the ruins in a country where not even Armageddon can rubble the discipline.

Up the river, miles from Ishinomaki, a car floats by. Other cars are hanging from the trees. Fridges, stoves and parts of houses have been washed up a few meters high on the river bank. Then comes the stench of seaweed, rotten meat, cloak, dead fish and deceased people. Mud and driftwood, plastic containers and household products are spread out over the landscape. The train rails are barely visible under the rubbish.

Mr. Honda, a fisherman whose family and house survived the tsunami but who has lost his city, does not understand why people would steal and rob (N.B. comment on the fact that Western media at the time had expressed surprise on the matter) This is all about solidarity, he says. And “ganbatte”, keep on keeping on.

–         In Western media I’ve heard that you are surprised that we are cuing up for hours without complaining. But are we otherwise to do? He says.

Calmly and methodically, people clean out the rubbish out of their houses. A terrible stench emanates from the trash piles. Everywhere, there are cars hanging and dangling from the most unbelievable places. It is not difficult to understand how 20 000 people have lost their lives in this catastrophe. Out of them, about 10 000 have died just here in Ishinomaki. And 8000 people are still missing.

Where there was life, there is now nothing.

–         Look at the shipyard, says Okamoto Sensei and points to an immense pile of rubbish.

The son is suffering from an eye infection.

–         We’re lucky that this did not happen in the summertime because imagine the diseases then, the father says.

When I remark that they do not have electricity or petrol to warm their winter homes with, he smiles.

–         No, but we have clothes! After the tsunami, we spent two nights in the car, together with 90 year old grandmother.

Small trucks with water tanks regularly stop in neighbourhoods that are still inhabitable. A man cycling past us explains that he has been filling up a few bottles with water from the muddy river. It might be a month before there will be running water in the houses still standing. Electricity is back in many homes but it was pitch dark for four days after the earthquake.

A sign outside Ishinomaki’s largest evacuee centre explains that they are full. 1200 people are crowding inside the small rooms. Warm food has just been served for the first time since the tsunami on the day that we visit the area and heaters have just been delivered. Shota Saito, 9, looks tired and drowsy, but his face lights up when we give him a football.

Many have lost their homes

Yesterday the evacuees were for the first time taken in buses to bath houses. They had not bathed or showered for 11 days.

An anonymous volunteer explains that there are three different aid instances: the military, the government and the volunteer organisations. But there is not much coordination in between.

–         There are still dead bodies in houses around her, he says despairingly.

Earth sunk during the earthquake. The sea is therefore making its way inland with every high tide. Cars can no longer travel after a certain hour and people are wading through the streets with water half way up their calves. In the midst of the mud and the stench down in the harbour, workers are building an elevated road so that trucks can drive down to the dock.

A woman walks around in her ruined town in search for something, anything, that might still be useful. She reaches up to a branch in a tree and picks down a coat-hanger. A man who has lost his family is searching for his office safe amongst shoes, ceramics, jewellery and photographs.

As we drive away, I notice in the rear-view mirror that he picks up a watch and hits it a few times against his forearm. Maybe time will start ticking soon again.

But in Onnagawa, it is going to take many years. There is nothing left here; half the city’s inhabitants are feared dead. The tsunami arrived from two sides and transformed the entire town into a gigantic trash pile. A man walks around, holding his son’s hand. He is searching for his wife who disappeared from their home on the day of the tsunami. But neither the wife nor the house can be found.

The military has 100 000 men present in this area, a third of Japan’s defence force. They are leaning over a map showing areas where bodies still need to be searched and recovered from. This first phase in the rescue operation is estimated to last for 21 days. One day at a time is crossed over in red on the calendar.

All the time, the nuclear threat is hanging over them. Yesterday, we were exposed to 12 micro Sievert/hour; a radiation dose that can have bad consequences on the long run. But today, the meter stayed on 0. On our way home across the flooded streets, an after-shock rocks the earth under our wheels. When we reach back, it has started to snow.