Photo caption: Tabayaki Katamata is a wholesaler at the world’s largest fish market. Now when a nuclear catastrophe possibly threatens; he worries about the fishing industry’s future in Japan.

“Of course I am worried”

–          The Japanese are too easy going! Says Tabayaki Katamata, wholesaler at the world’s largest fish market, Tsukiji in Southern Tokyo.

–          But that does not mean that we don’t question the information we receive. We do it silently and we worry, he explains.

Tabayaki buys shellfish and seaweed from fishermen and factories that produce fish related products and then sells it to restaurants and shops both in Japan and abroad. The earthquake and the tsunami that occurred on March 11th have deeply shaken the Japanese fishing industry. Factories have been completely destroyed and many fishermen have lost their lives. Ships were wrecked and crashed to pieces, factory workers who survived now live in temporary shelters for evacuees. And now there is a fear for radiation and radioactive materials looming like an invisible threat over the fishermen and their products.

–          Of course I am worried about the fish being potentially contaminated. And there is nothing I can do about it, says Tabayaki and continues:

–          It will have consequences for the fishing industry. But which ones?

Yuko Enomoto also wonders about the potential consequences. She has today received the first copy of her new book, “People’s thoughts about Tsukiji – 52 messages about the fish market that has the power to influence the world.” According to Yuko there are three important points to discuss: “Environmental questions – before and after the earthquake, The people behind the crisis – how the tsunami’s consequences influence everybody, and The world’s shared responsibility for the fishing industry’s future.” There is a lot of controversy surrounding the Japanese fishing industry and Yuko wonders how it can now handle the (international) fear for radiation. 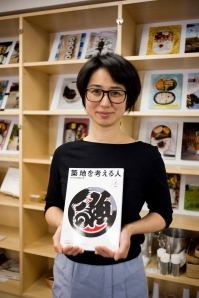